At Farrington High School on Fridays. 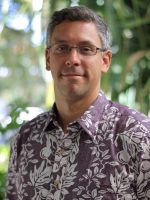 Benjamin Kilinski is the School of Nursing and Dental Hygiene (SONDH) liaison to Hawaii Keiki. He ensures that SONDH faculty, students and community are engaged and included as partners with Hawaii Keiki and each of its schools. He fosters interprofessional collaboration, manages the clinical placements/fieldwork of students, and serves as a point of contact for community based initiatives interested in engaging with Hawaii Keiki.

Ben has been a Pediatric Nurse Practitioner since 2012, specializing in primary care with national board certification through the Pediatric Nursing Certification Board. In addition to advanced practice nursing, his experience as a Registered Nurse includes 4 years of pediatric and emergency nursing at a premier pediatric hospital in Brooklyn, NY. Prior to his career in nursing, Ben spent nearly a decade working through United Way Organizations to provide direct services for homeless youth and children with developmental disabilities. He received both his undergraduate (2009) and graduate (2012) nursing education at New York University College of Nursing in New York City.

Before joining the Hawaii Keiki program in 2015, he worked for a Federally Qualified Health Center serving as the Lead Provider of a School Based Health Center in the East Harlem neighborhood of Manhattan. As a participant both in CNCS’s Americorps and HRSA’s National Health Service Corps, Ben has demonstrated a consistent commitment to vulnerable populations. Ben has served as adjunct faculty with NYU College of Nursing, is a fellow of the National Association of Pediatric Nurse Practitioners, and maintains membership in Sigma Theta Tau International Honor Society of Nursing.