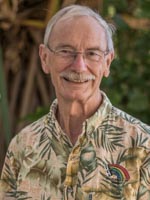 Prior to serving in the Nancy Atmospera-Walch School of Nursing, Dr. Casken served in the former School of Public Health at the University of Hawaii where, in addition to a regular instructional program, he also ran a very successful program for the recruitment of American Indians and Alaska Natives to the School’s MPH Program. Dr. Casken’s involvement in the health issues of American Indians was developed during the five years he spent on the Pine Ridge Reservation in South Dakota after earning his MPH.

At the Nancy Atmospera-Walch School of Nursing Dr. Casken concentrates on rural /community health and the health issues of Native Hawaiians. He is especially interested in how these seemingly innocuous issues become so politicized. He is very active in the Advanced Public Health Nursing specialization. Nationally, Dr. Casken serves on the Board of ETR Associates, on the Board of the Center for American Indian and Indigenous Research and Education and also on the Board of the American Indian, Alaska Native and Native Hawaiian Caucus of the American Public Health Association. In 2000, Dr. Casken was awarded the UH Board of Regents Medal for Excellence in Teaching.