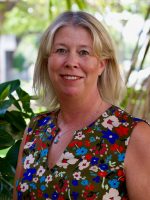 COL (ret) Laura Trinkle is the Director of Administration, Operations, and Relations for the Hawaii Keiki: Healthy and Ready to Learn Program. In this role, she is responsible for the overall administration of the program working under the direction of the Senior Practice Director and supporting the HK team.

With more than 29 years of experience in healthcare management with 15 years at the executive level, she retired from the Army with the rank of Colonel. She served at every level of Army Medicine from a Mobile Army Surgical Hospital to the Office of the Surgeon General. Her last position in the Army was as the Chief of Staff for Regional Health Command – Pacific. She deployed to both Kosovo and Iraq where she was a Deputy Commander and the senior administrator for a Combat Support Hospital.

Laura’s dedication to service brought her to Hawaii Keiki, where her leadership and healthcare experience can directly impact the future of Hawaii by improving the health of our keiki.