Award winning journalist and author, Suzanne Gordon, made a special appearance in Hawaii on September 21-22, 2014 as a guest lecturer, supported by the Frances A. Matsuda Endowment. Gordon is nationally and internationally known for work on health care delivery, health care systems, and patient safety. She has lectured all over the world and has appeared frequently on radio and television. Her articles have appeared in Harpers, The Atlantic, The New York Times, Los Angeles Times, and The Annals of Internal Medicine. 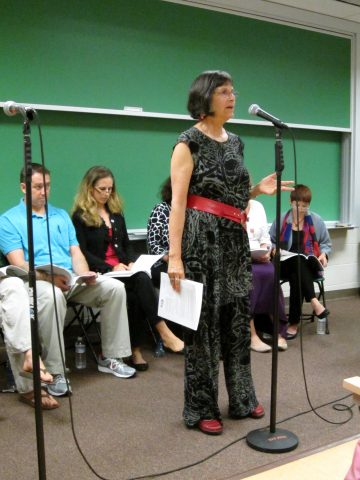 During her time in Hawaii, Gordon directed UH Manoa nursing faculty and students in a play titled, Bedside Manners, which she co-wrote and produced. The play focuses on team relationships in healthcare and has been performed all over the country at universities, medical centers and is being used in Interprofessional Education programs throughout the US. She met with Robert Wood Johnson New Careers in Nursing Student Scholars at the school where she discussed the importance of effective team communication among the healthcare team.

Gordon led a discussion with members of the Hawaii Action Coalition (HAC) on building a culture of safety in healthcare, followed by a community presentation on Team Intelligence co-sponsored by The Queen’s Medical Center. For more information about Suzanne Gordon’s work, visit her website at http://suzannecgordon.com/.