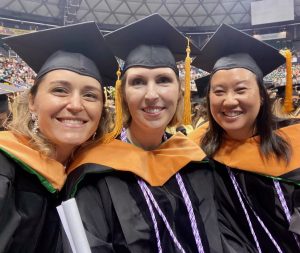 Courtney DeConto, DNP, APRN-Rx, CPNP-PC, is the Castle-Kahuku Complex Area APRN. She has been with the program since 2018 and previously served the Nanakuli-Waianae Complex Area. DeConto started her nursing career in pediatrics as a registered nurse at the University of North Carolina Chapel Hill Children’s Hospital. She obtained her Masters of Science in Nursing degree in 2012. She worked as a pediatric primary care provider for several years before moving into pediatric urgent care with the Queens West After Hours Center. DeConto’s experience with the Hawaii Keiki program inspired her DNP project titled “Educating Hawaii Keiki Stakeholders on the Scope of Practice of the Advanced Practice Registered Nurse.”

Lisa Jacquet, DNP, APRN-Rx, NP-C, NCSN, was the Castle-Kahuku Complex Area APRN from 2017-2022. She recently relocated to the U.S. Mainland with her family. Jacquet’s background is in family practice. She obtained her Bachelor’s Degree in Nursing from the University of Central Florida, her Masters of Science in Nursing from the University of Missouri-Kansas City, and her Doctor in Nursing Practice from the University of Hawaii at Manoa. Jacquet’s DNP project was titled “Major Mental Health Referral Quality Improvement Project for Castle High School Staff.” Jacquet was awarded the Dean’s Scholarly Project Award for her exceptional initiative on improving mental health referral processes for the Hawaii Department of Education staff.

Kaberi Mozumder, DNP, MSN, APRN-Rx, PPCNP-BC, NCSN, is the Neighbor Island Supervisor and Virtual Health Lead. She has been with the program since 2019 and part of the administrative team since 2020. Mozumder has been a pediatric nurse practitioner since 2008 when she graduated from Yale University School of Nursing. She has worked in various pediatric settings including acute care, primary care and urgent and also holds 8 years of experience in pediatric cardiology and cardiothoracic surgery. She has worked for a number of large academic institutions including Lucile Packard Children’s Hospital at Stanford, Children’s Hospital of Los Angeles and Cedars Sinai Medical Center. Mozumder is passionate about virtual health, working with patients in rural areas, and mentoring RNs which led to her focus of her DNP project titled “Formative Evaluation of a School-Based Telehealth Program Using Interactive Technology to Connect RNs to APRNs.”

Kailene Oliveros, DNP, APRN-Rx, NP-C, NCSN, has dual roles and is the Oahu Supervisory APRN and the Family Nurse Practitioner for the Leilehua-Mililani-Waialua Complex Area. She has been with the program since 2017. Oliveros graduated with her Bachelor of Science in Nursing in 2003 from the University of Northern Colorado and her Masters of Science in Nursing in 2013 from Regis University. Oliveros started her nursing career at the Children’s Hospital of Colorado. Prior to coming to Hawaii Keiki, Oliveros practiced as a nurse practitioner in the Neurology Department at the Children’s Hospital of Colorado. It was her work in Hawaii Keiki that inspired her project to help improve mental health services in the school-based setting. Oliveros’ DNP project was titled “Piloting a Clinical Mental Health Process in the Intermediate School Setting.” 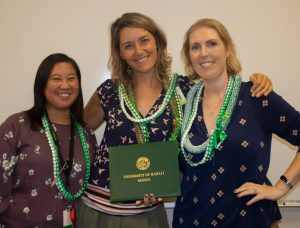