Ken and Donna Hayashida’s first meeting was straight out of a romantic comedy — in an elevator while moving into the Hale Aloha Lokelani dormitory tower on move-in day at the University of Hawaii at Manoa, with Donna’s father standing between them.

“Ken jumped in the elevator with Dad and me, he said ‘Hi, I’m Ken,’” Donna recalled. “My dad was not too happy because he wanted me to focus on studying.”

The two became fast friends, with Ken knocking at Donna’s door each night to invite her to join him at the dorm’s snack bar to talk about their days.  They eventually went their own ways and, now, 41 years, two kids and one business after that first encounter, Ken and Donna Hayashida are making a substantial investment in their alma mater, with gifts totaling $250,000 to the College of Engineering and the Nancy Atmospera-Walch School of Nursing, to ensure other students can get the same quality education they received and to invest in Hawaii’s future.

Along with a $250,000 gift to the College of Engineering from KAI Hawaii Inc., the structural engineering company founded by Ken in 1995, the couple has committed a total of $500,000 to UH.

“We’ve been very blessed and fortunate in our lives and lots of it has to do with the University  of Hawaii,” says Ken, an Iolani School alumnus and 1983 College of Engineering grad. “The University of Hawaii has provided a great education.”

While the couple had always planned to make a gift to UH as part of their estate planning, the Covid-19 pandemic put such planning in sharp relief and they decided to move up their timetable.

“The last few years have changed how we see life and the world as a couple,” says Donna. “The university needs our help now more than ever, so why wait? The time to give back is now. We’re thinking about the future of Hawaii. Our community is our ohana.”

Building a life together

Ken left Hawaii after graduation to pursue a master’s degree in civil engineering at Stanford University, then stayed in California to start his career. Donna graduated from the nursing school in 1983 and went to work as a registered nurse at The Queen’s Medical Center before working as an RN with the state.

In 1995, when Donna was pregnant with their second child, Ken started his own company, KAI Hawaii Inc. — named for their first son, Kai — in the couple’s home before moving to the back of a storeroom behind an Orowheat Bakery store.

As Ken focused on growing the business, Donna left nursing in 1999 to focus on raising Kai and his younger brother, Noah. By 2003, Ken bought the 31 North Pauahi Building in Chinatown to house KAI Hawaii, which by then had 23 employees.

Several years later, the company outgrew the Chinatown space with 32 employees, and bought a larger space in a commercial condominium at Kukui Plaza, where the company is based today with 50 employees.

After working with KAI Hawaii for a while, Donna turned to running another family business named for their second son, Noah’s Development, managing the family’s real estate.

Ken and Donna’s two sons graduated from Punahou School and went to college in California and Colorado, following their father’s path into engineering, and both have master’s degrees from the University of Southern California. Kai, 27, works for the Los Angeles office of structural engineering company WSP, while Noah, 25, also works in Southern California, for an engineered material company called II-VI Aerospace and Defense.

In 2016, KAI Hawaii became an employee-owned business under an employee-owned stock ownership plan, or ESOP, ensuring the company’s future. The company was named Engineering Firm of the Year in 2019 by the Hawaii chapter of NAIOP. A renovation of Hawaii Hall, the oldest building on the Manoa campus, is among the more than 4,000 projects KAI Hawaii has completed over the past 26 years.

The value of education

Both Ken’s and Donna’s grandparents and great grandparents immigrated to Hawaii to work on plantations. Both of their fathers were the first in their families to graduate from college and both graduated from UH — Kenʻs father, Kazu Hayashida, was an engineer who served as director of the state Department of Transportation — while his mother, Suye, became an elementary school teacher. 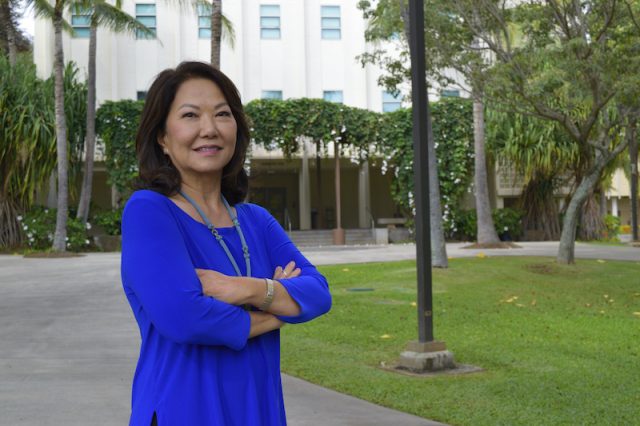 Donna’s father, William Lau, was a pathology medical technologist at Kuakini Medical Center, while her mother, Carol, was the cafeteria manager at Aiea High School, from where Donna graduated.

“Our grandparents instilled upon our parents the value of education,” Donna says. Donna is one of six children, and she and her two sisters were in college at the same time so the two scholarships she received were essential to helping her stay in school and graduate with her nursing degree.

“I’ve been eager to pay it forward ever since, which is why we decided to create a School of Nursing scholarship and an education development fund for the College of Engineering,” Donna says. “We’ve seen firsthand how nurses and engineers touch everyone’s lives, from birth to death, so we made a decision to support future generations of nurses and engineers through these two new endowments.”

Ken said he saw firsthand just how important nurses are to patients some years ago when Donna experienced life-threatening complications from a routine surgery. It was the nurses who listened to Donna when she returned to the hospital after being discharged and recognized something was not right, and the nurses who convinced the surgeon to run more tests to find she had developed sepsis and peritonitis. Emergency surgery and a month in the hospital followed.

“I don’t normally talk about this experience, but truly, the nurses at The Queen’s Medical Center saved my life,” Donna says. “This is a life-threatening condition and most people die from it.”

The Ken and Donna Hayashida Foundation Nursing Scholarship Endowment will support nursing students by helping to help pay for costs associated with attendance such as tuition, books and fees.

“Ken and Donna’s gift is a special reminder of how nurses make a difference in so many lives every single day. Their endowment will ensure generations of nursing students receive needed scholarships to stay in school and focus on their studies,” says Clementina D. Ceria-Ulep, interim dean of the UH Manoa Nancy Atmospera-Walch School of Nursing. “We are forever grateful for their gift and for their dedication to educating our future nurses.”

Ken has also been passionate about supporting his alma mater over the years, serving on the College of Engineering Dean’s Council and as president and director on the board of the UH Alumni Association.

“When I really think back, what’s prompted me to stay connected started when I was a student,” Ken says, recalling the late Dr. Arthur Chiu as “a great professor and a great mentor to me.” In 1992, after Hurricane Iniki tore through Kauai, Dr. Chiu recruited Ken to join the damage assessment team that eventually updated the Hawaii building codes for high winds.

Ken also says he was influenced by his father and leaders of his generation. The couple’s gift to the College of Engineering will support students with great leaders at the school.

The Ken and Donna Hayashida Foundation Leadership Endowment at the College of Engineering will support student leadership activities, specifically the college’s Leadership Seminar Series and other events linking students with community leaders. A separate $250,000 gift from KAI Hawaii will endow a new Vertically Integrated Project, or VIP, related to sustainability and resilience.

“Ken and Donna have been longtime supporters of the university as a whole, but especially the College of Engineering and School of Nursing. Having alumni like the Hayashidas giving back to their alma matter the way they have is truly humbling to us because our success as a university really lies with our alums,” said Brennon Morioka, dean of the College of Engineering. “So our work is cut out for us to ensure we are continuing to uphold the quality of education we provide our students while also developing new and creative opportunities for them to succeed.”

The couple recognizes that as Hawaii faces challenges now and in the future, the state will need a new generation of leaders, especially in finding solutions for renewable energy, sustainable agriculture and diversifying the economy.

“The University of Hawaii is key to providing us young people who are committed to change our community for the better,” says Ken. “And that’s going to require all of us to invest in our university so that we have young people that can lead and innovate and provide us a safe, sustainable and resilient community.”

To contribute to the Ken and Donna Hayashida Foundation Nursing Scholarship Endowment, gifts can be made securely online on the University of Hawaii Foundation website.