In her role as director of the Future of Nursing: Campaign for Action, Robert Wood Johnson Foundation (RWJF) Senior Adviser for Nursing Susan B. Hassmiller, RN, PhD, FAAN, travels across the country to meet with leaders who are working to transform nursing in their states.

During these trips, Hassmiller makes a point of seeking out and spending time with New Careers in Nursing (NCIN) scholars as well. 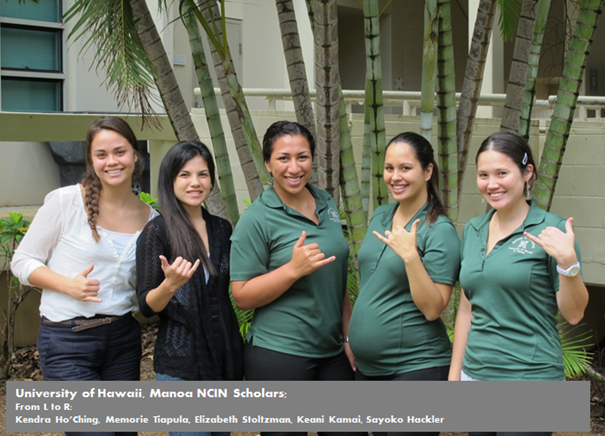 In December 2012, on a trip to meet with Hawaii’s Action Coalition, Hassmiller also visited with nurses and nursing students at the University of Hawaii. After a short presentation about the Campaign for Action and RWJF’s commitment to nursing, Hassmiller met with a group of NCIN scholars. She asked what led them to pursue nursing as their second careers, and how NCIN had made a difference in their education.

“It was fun watching the interaction between them,” University of Hawaii Masters Entry Program in Nursing (MEPN) Director Allen Hanberg, PhD, RN, said. “Living here on a small island, it’s difficult to gain access to a lot of the resources that are available on the mainland, and so to have an opportunity like the NCIN program really makes a huge difference for our students who are underrepresented in nursing and also underserved with so many other resources.”

“I was impressed with her interest in hearing the students’ stories,” Hanberg adds. “She took the time to get to know them, and I think it made an impact on Sue to hear about their hardships and the challenges they face, and how much NCIN has impacted their lives.”

One NCIN scholar, Sayoko Hackler, told Hassmiller that watching her grandmother’s life-long struggle with diabetes motivated her to pursue a health care career. With the scholarship she’s received from NCIN, she feels confident she can eventually get a doctoral degree in nursing, and stay in Hawaii to practice and give back to her community.

Memorie Tiapula, who originally planned to go to medical school, realized she could still diagnose and treat patients as a family nurse practitioner, and complete her education in less time because of NCIN’s support for her enrollment in an accelerated nursing program. As a single mother, she values being able to complete her education more quickly. Tiapula said the NCIN program has enhanced her leadership skills, which will prove valuable in her new career.

NCIN Scholar Elizabeth Stoltzman shared her experience helping care for her father when she was young, after he was badly injured on the job and opted against amputation for a crushed foot. The NCIN program has helped her financially, but she says it has also helped her look at the profession differently. “The good thing about RWJF is that they’re providing us with so many avenues and keeping us just a step ahead of the game,” Stoltzman said. Though Hassmiller’s visit was her first introduction to the Future of Nursing: Campaign for Action, Stoltzman says she may well get involved in the movement after graduation. “It feels special to be among such leaders in nursing and I look forward to the opportunities that I think being an NCIN scholar is going to open up for me. I’m going to try to take it all in.”

“Having Sue join us was an honor and a privilege,” MEPN Coordinator Shannon Mark, MEd, said. “For our scholars to hear from someone with such a high ranking in the field of nursing was definitely a very positive—and once in a lifetime—experience for many of us.”

Dr. Hassmiller also visited Oregon Health & Science University (OHSU) in February, on a trip to meet with the state’s Action Coalition. She took time there to get to know each of the NCIN scholars and their backgrounds, and talked to the students about the Institute of Medicine’s Future of Nursing report.

“She was a great advocate for the recommendations contained in the report and certainly encouraged each of us to pursue higher education and to practice to the full extent of our education and licensure,” NCIN Scholar Brett Stendell said. “She mentioned on more than one occasion that Oregon was a leader in health care reform and that we were fortunate to be in a state that already afforded advanced care nurse practitioners a good deal of autonomy in their practice.”

Scholar Corinna Beyer said she was impressed with Hassmiller’s genuine interest in the scholars, and left the meeting enthusiastic about where her new profession is headed. “I was inspired by how much influence nurses will have in health care reform, at all degree levels, especially when we can advocate for ourselves to practice at the top of our education and training,” she said. “I am certainly inspired to be involved in the grand changes that are happening in health care right now… and I would love to work in a project like the Oregon Action Coalition.”

“We were all pleased to have Sue Hassmiller come to Oregon,” said Ann Nielsen, RN, MN, assistant professor and undergraduate nursing program director at OHSU. “I think that she does such a wonderful job of describing the Future of Nursing initiative and helping people understand what its value is. The NCIN program has a very large leadership component and we saw that as a tremendous opportunity for our students to talk with a national leader and understand the big picture of where nursing is headed.”

The admiration is mutual. “I am so impressed with the New Careers in Nursing scholars I meet,” Hassmiller said. “Many of them have overcome great obstacles, and they bring maturity and life experience to nursing that gives them an extremely valuable perspective. Through the NCIN program, they are becoming the kind of rising stars our profession needs. Their voices and leadership will be tremendously helpful as we transform nursing, and work together to improve patient and population health.”