The opportunity to travel abroad allows students to gain credits towards graduation but also to expand their cultural experiences and worldviews. Students interacted with the friendly people of Ireland and noted in their reports comparisons between the colonial history of Ireland and their push to use the Irish language, Gaelic, and the push for Hawaiian language use in Hawaii. 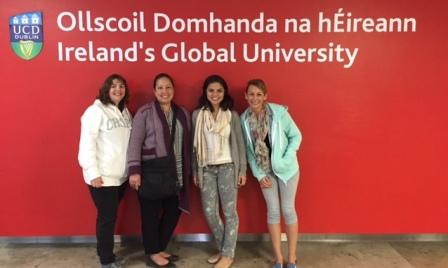 In addition to their academic studies, students explored Dublin city using the local double decker buses and learned Irish games. A highlight of the program was a two-day trip to Galway in the far West of Ireland where they took a ferry to Aran Isles where the traditional Gaelic culture is predominant. They also traveled around the Island of Inishmore by bicycle, where they visited ancient ruins and monuments.

If you are a nursing student who needs to take N363 Nursing Research and an elective in Fall 2016, contact John Casken at casken@hawaii.edu or (808) 956-5750. The UH Manoa Study Abroad Program may be a summer solution to earning 6 credits and an amazing experience.