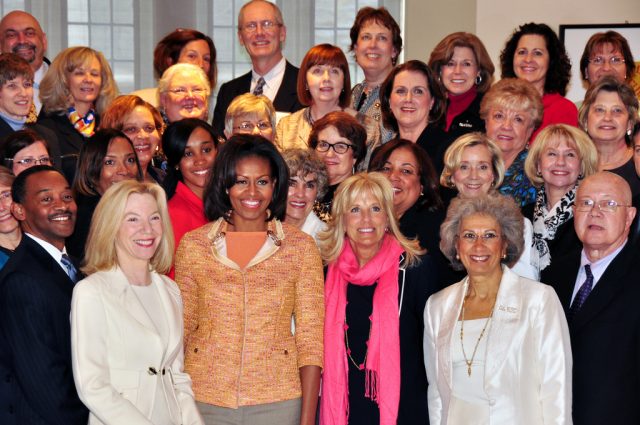 The University of Hawaii at Manoa Nursing School, led by Dean Mary Boland, is taking part in Joining Forces to improve health care for the country’s active duty military, veterans and their families. The Nursing School is joining the ranks of schools in educating nursing students on post-traumatic stress disorder (PTSD) and traumatic brain injury (TBI) in the coming years.

On April 11, 2012, First Lady Michelle Obama and Dr. Jill Biden announced a commitment from nurses across the country eager to serve veterans and military families as well as they have served the nation.  Dean Boland was one of 20 nursing deans nationwide invited to attend the April 11 campaign event with First Lady Michelle Obama. “UH Manoa Nursing is honored to join this effort in support of our country’s service members, veterans and their families,” said Dean Boland.  “The nurses in Hawaii are strongly committed to delivering high quality care to our veterans and their families.”

Led by the American Nurses Association, American Academy of Nurse Practitioners, American Association of Colleges of Nursing, and the National League for Nursing, in coordination with the Departments of Veterans Affairs and Defense, more than 150 state and national nursing organizations and over 500 nursing schools have committed to educate the nation’s three million current and future nurses on how to recognize and care for veterans impacted by PTSD, TBI, depression and other combat-related issues, in ways appropriate to each nurse’s practice setting.

Dean Boland noted that UH is one of only 13 nursing schools in the VA Nursing Academy. This program has enabled increases in clinical and instructional capacity with the VA Pacific Islands Health Care System (VAPIHCS) and Tripler Army Medical Center (TAMC).  “Through this collaboration, we also enriched our nursing curriculum to ensure that all nursing students understand the challenges that military service members, veterans and their families face, such as issues with PTSD and TBI,” said Dean Boland.  “Yet, there’s still much more we can do to better meet the needs of our veterans wherever they seek health care.”

PTSD and TBI have impacted approximately one in six of the troops returning from Afghanistan and Iraq, or more than 300,000 veterans. Since 2000, more than 44,000 of those troops have suffered at least a moderate-grade TBI.

Veterans seeking care within the Veterans Affairs (VA) health system are often treated by health care professionals who have received extensive training in mental health issues.  But the majority of veterans in the country seek care outside of the VA system—usually visiting their local hospital staffed by nurses and doctors in their communities. At UH Manoa, sixty percent of nursing students have clinical experiences at the VAPIHCS and TAMC, which enables them to share their understanding and experiences in veteran health care anywhere in the Hawaii community where nurses provide care.  Nurses are trusted partners in providing lifesaving and life-sustaining care in nearly every community and every setting where health care is delivered. They can make a dramatic and positive impact on the long-term health of hundreds of thousands of veterans.

More information is available at: http://www.whitehouse.gov/joiningforces.

The University of Hawaii at Manoa serves approximately 20,000 students pursuing more than 225 different degrees.  Coming from every Hawaiian island, every state in the nation, and more than 100 countries, UH Manoa students thrive in an enriching environment for the global exchange of ideas.  For more information, visit http://manoa.hawaii.edu. Follow us on Facebook http://www.facebook.com/uhmanoa and Twitter http://twitter.com/UHManoaNews.