UH Manoa Nursing hosted the 2016 Veterans Day Celebration on Wednesday, November 9, 2016 at Hawaii Hall Lawn on campus. The purpose of this event was to honor all veterans and to recognize 13 student veterans who received scholarships to purse higher education.

The UH Manoa Nursing Veterans  to BSN Program provides college credit for veteran’s past medical experience, creating a quick pathway to professional nursing and employment for service members with skills and experience in health care. The initiative is the first program of its kind in Hawaii and is part of the national effort to address the growing demand for health care services throughout our nation. 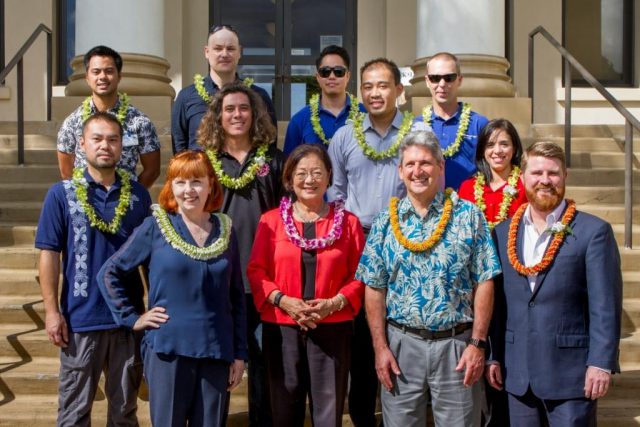 U.S. Senator Mazie K. Hirono attended the event and said, “The University of Hawaii and the Veterans to Nurses Program have been vital partners in our veterans’ transitions from military to civilian life. There is widespread support for these kinds of programs and I will continue to push for them.”

UH Manoa Nursing Dean Mary G. Boland, DrPH, RN, FAAN said, “UH Manoa Nursing is proud to be one of 20 schools of nursing and the only program in Hawaii to participate in this national initiative. Veterans are a vital community asset and we are fully committed to providing them with excellent nursing education.”

Veterans to BSN Program Principal Investigator Debra Mark, PhD, RN, FAAN said, “Veterans face a variety of challenges when returning to school. These scholarships will help to reduce the financial burden so that they can focus on succeeding in school. We are very pleased that we were able to support veteran students pursing nursing careers on Oahu as well as Maui and Kauai.”

The celebration included Posting of Colors by the UH Manoa Army ROTC Color Guard and singing of the National Anthem and State Song by UH Manoa students. A moment of silence to remember the sacrifices of members of the armed forces and civilians in times of war was followed by remarks from U.S. Senator Mazie K. Hirono, UH Manoa Nursing Dean Mary G. Boland, UH System President and UH Manoa Interim Chancellor David Lassner, and keynote speaker Jared Lyon. Jared Lyon is the President and CEO of Student Veterans of America. The celebration was followed by a free cake reception honoring the U.S Marine Corps 241st birthday on November 10.

The University of Hawaii at Manoa is a participant in the Yellow Ribbon Program and the national presidential initiative, Joining Forces. UH Manoa Nursing is a partner in the Veterans Administration Nursing Academic Partnership (VANAP) and the Jonas Scholarship Program.

This event was supported by the UH Manoa Nursing Achieving a BS in Nursing – A Veterans’ Initiative Program and the UH Manoa Student Activity & Program Fee Board. Special thanks to the May & Stanley Smith Charitable Trust, the Shelley Wilson Nursing Scholarship for Veterans and Dr. Lawrence K.W. Tseu for supporting nursing student veteran scholarships.

This project is supported by the Health Resources and Services Administration (HRSA) of the U.S. Department of Health and Human Services (HHS) under Grant no. UF1HP26981. For more information about the Veterans to Nurses program visit www.nursing.hawaii.edu/vetstonurses.

UH Manoa Nursing, the Nursing Capital of the Pacific, is the leader in nursing education and research in Hawaii with outreach to Asia and the Pacific Basin. We support the mission of the University of Hawaii at Manoa: to provide an innovative, caring and multicultural environment in which faculty, students and staff work together to generate and transmit knowledge, wisdom, and values to promote quality of life and health for present and future generations. The school offers the BS, master’s, and doctoral programs. To reflect Hawaii’s unique cultural diversity and heritage, UH Manoa Nursing is committed to increasing the representation of Native Hawaiian and other underserved people in all nursing programs. Visit us at www.nursing.hawaii.edu.