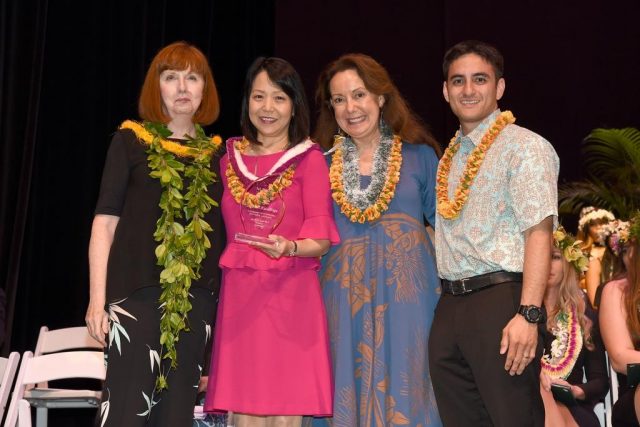 UH Manoa Dean Mary G. Boland, DrPH, RN, FAAN, thanked Kaneshige for generously volunteering her time and providing leadership to the alumni association over the past 5 years. She spearheaded three scholarship fundraiser events in 2014, 2015, and 2017. Thanks to her enthusiasm, the chapter raised more than $68,000 and endowed a scholarship that will support nursing students in perpetuity.

Kaneshige served as vice president from 2012 – 2015 and as president from 2015 – 2017. She has guided the chapter to build stronger relationships with the student ambassador program, the student nurses association and the school. The chapter continues to host networking events and has continued their annual scholarship fundraiser event.

This June, Kaneshige will end her term as president. UH Manoa Nursing, the chapter’s board of directors, alumni and students, thank Kaneshige for her indelible contributions and presented her with a recognition award at the event.