On Thursday, November 8, 2018 The UH Manoa Office of Veteran Student Services (OVSS) with the school hosted the 2018 Veterans Day Celebration at Hawaii Hall Lawn for UH Manoa Campus. The event honors all veterans and recognized 16 student veterans who received scholarships to pursue careers in nursing.

The keynote speaker was Major General Suzanne P. Vares-Lum, Mobilization Assistant to the Commander, U.S. Indo-Pacific Command (USINDOPACOM) from Camp Smith, Hawaii. MG Vares-Lum is the first female Major General of Native Hawaiian ancestry in the U.S. Army. She received a Master of Education in Teaching and a Bachelor of Art degree in Journalism from the University of Hawaii at Manoa. She was inducted into the University of Hawaii Reserve Officer Training Corps (ROTC) Warrior Battalion General Officer Hall of Fame in 2016. MG Vares-Lum is the first female UH ROTC graduate to achieve the rank of General Officer and is the 18th General Officer to commission out of the UH ROTC program. 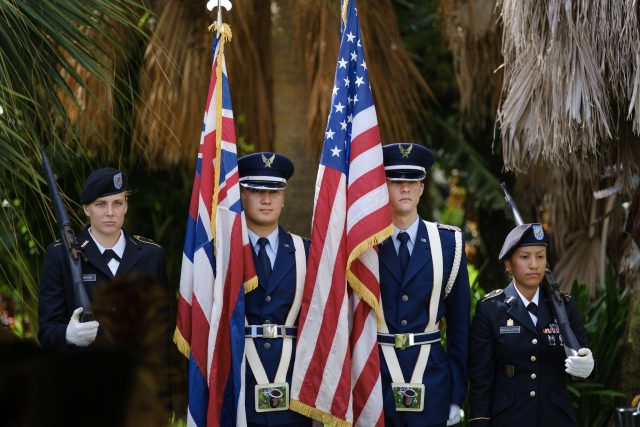 The program concluded with a cake cutting celebration honoring the U.S. Marine Corps 243rd birthday and the Retirement of Colors by the UH Manoa Army and Air Force ROTC Joint Color Guard.

This is the fourth year that the UH Manoa Nursing Veterans to Nurses Program received funding from the May & Stanley Smith Charitable Trust to provide 11 scholarships to student veterans pursuing careers in nursing. Student veterans received between $750 to $8,595 to further their nursing education at UH Manoa and Kapiolani Community College. Scholarship recipients are all veterans and have served in the U.S. Air Force, Army, and Navy.

This is the first year that OVSS received funding from the Sidney Stern Memorial Trust to provide five scholarships to UH Manoa student veterans via the Student Veteran Scholarship Fund established with the UH Foundation. The Sidney Stern Memorial Trust is devoted solely to the funding of charitable, scientific, medical, and educational organizations. It endeavors to support soundly-managed charitable organizations which give service with broad scope, have substantial effect on their target populations and contribute materially to the general welfare. Scholarships ranged from $600 to $1,475. Recipients are all veterans and are pursuing undergraduate degrees from botany, business, kinesiology and rehabilitation sciences, and graduate degrees from kinesiology and rehabilitation sciences, and law.

This event is supported by the Office of Veteran Student Services, UH Manoa Nursing Achieving a BS in Nursing – A Veterans’ Initiative Program, the Student Veteran Organization, and the UH Manoa Student Activity & Program Fee Board. Special thanks to the May & Stanley Smith Charitable Trust for supporting nursing student veteran scholarships and to the Sidney Stern Memorial Trust for providing scholarships to UH Manoa student veterans.

The UH Manoa Nursing Achieving a BS in Nursing – A Veterans’ Initiative Program is supported by the Health Resources and Services Administration (HRSA) of the U.S. Department of Health and Human Services (HHS) under Grant no. UF1HP26981 Nurse Education, Practice, Quality and Retention Veterans’ Bachelor of Science in Nursing Program for $1,397,888. This information or content and conclusions are those of the author and should not be construed as the official position or policy of, nor should any endorsements be inferred by HRSA, HHS or the U.S. Government.

Photos from the event can be viewed in the UH Manoa Nursing flickr Veterans Day Celebration 2018 album.