In the early Eighties, an unknown disease began to affect primarily gay men. After much research, it was clear that it was a cluster of diseases and was named HIV/AIDS.  Unfortunately, in the early days there was simply no cure and a diagnosis of HIV/AIDS was essentially a death sentence. 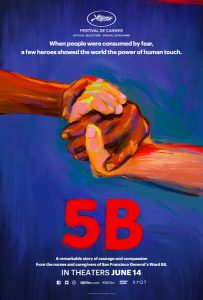 Hospitals who had admitted HIV/AIDS patients were unsure of how to provide care – especially when the mode of transmission was unknown. So patients were often confronted by nursing staff that were covered with head to foot protection. For a patient who already felt stigmatized, the effects of these type of treatment were devastating to many.

At the San Francisco General Hospital, where many of the HIV/AIDS patients were being treated, a group of nurses took matters into their own hands and created a special ward called “5B”. If the patients couldn’t be cured, at least the patient could know that someone cared for them and saw them as a human being.

The story of how all this happened, as well as the back stories of the nurses who made it happen, was the subject of a recent documentary released in June 2019 with the simple title “5B”. The movie had two main themes. First, nurses are tough and courageous, even in the face of possible death. Two, all people should be treated with dignity.

With that in mind the Hawaii Health and Harm Reduction Center (H3RC) brought the movie to Honolulu for its only showing as a fundraiser for H3RC. The agency is a merger that includes the former Life Foundation – an organization working with HIV/AIDS clients.

UH Manoa Nursing provided significant support due to the movie’s focus on the strength of nurses and celebrates nursing as a profession. Undergraduate nursing students were invited to attend the movie screening for free, and faculty and staff attended with compliments to the school and other donations.

Heather Lusk, CEO of H3RC thanked UH Manoa Nursing for its donation of tickets allowing the increased visibility to nursing students, faculty and staff. Lusk noted that nurses play a critical role for many of the less fortunate here in Honolulu and she expressed the hope that the movie would encourage nurses to continue to challenge the status quo for the benefit of the patients and clients.