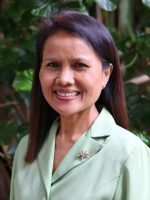 While Dr. Ceria-Ulep’s teaching focuses on adults, management, and administration, her research and scholarly activities have been on aging. Her research philosophy is, “Research is applied,” which is consistent with her role as a researcher at UH Manoa Nursing with a mission of “transmitting knowledge, wisdom and values to promote quality of life and health for present and future generations,” and her personal mission of “making a difference in this world.”

She was always very interested in how one can postpone or prevent institutionalization of the elderly. This quest stems from her experiences as a child. Her family was fortunate to immigrate to Hawaii from the Philippines through the kindness of an uncle, a plantation worker in the early 1900’s. In the Philippines, her family and she lived first with her paternal and then later with her maternal grandparents. Her paternal grandmother lived until 96 and grandfather until over 100 and both were productive up until their 90’s. She believes that the longevity and productivity of her paternal grandparents are due to the physical activity as farmers that they engaged in throughout their lifetime.

In 2004, Dr. Ceria-Ulep was noted for her Outstanding Dedication & Service for Faith Action for Community Equity (FACE). In 2010, she received the Excellence in Nursing Research Award from the Filipino Nurses of Hawaii. In 2016, she received the Outstanding Alumni award from UH Manoa Nursing at their 60th Anniversary event.