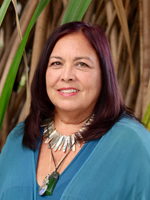 In September, 2010, Nalani and her brother, Dr. Kekuni Minton are invited to present their work on Cultural Healing from Intergenerational Trauma at the Healing Our Spirit Worldwide Indigenous Health Conference sponsored by Papa Ola Lokahi

In August, 2010 IKE AO PONO supported the enrollment of 110 Native Hawaiian and Pacific Islander nursing students for the Fall 2010 semester in all levels of nursing programs at the NAWSON, achieving the highest enrollment of native students to date

In July, 2010, IKE AO PONO was featured in a lead article in Ka Wai Ola, the OHA publication and Nalani was a featured speaker on the new OHA radio program

In June, 2010 Nalani received tenure at the UH NAWSON as the first Native Hawaiian faculty member in the almost 80 year history of the NAWSON

In May, 2010, Nalani helped to celebrate the graduation of 107 Native Hawaiian and Pacific Islander nurses through the support of the IKE AO PONO program which she directs.

This achievement was noted in the US Congressional record by Sen. Inouye on 5/7/10.

In 2008, Nalani Minton was presented with the Excellence in Community Health Award for IKE AO PONO. From 2006 to 2008, she received the Inspirational Teaching Award from IKE AO PONO and the School of Nursing. In 2007, the Nancy Atmospera-Walch School of Nursing gave the Merit Award for Innovative Teaching in Health and Education to Nalani.