UH Manoa Nursing Instructor Maria Guerriero, MSN, RN, received the 2015 Frances Davis Award for Excellence in Undergraduate Teaching at the UH Manoa awards ceremony held on May 5, 2015. The Award recognizes dedication and demonstrated excellence in teaching undergraduate students. It was established as a memorial to the late Frances Davis, who taught mathematics at Leeward Community College and UH Manoa for 19 years. The award recognizes Guerriero for her dedication to teaching, her demonstrated excellence as a teacher, and for her attention to undergraduate students. Guerriero was nominated by the School, was supported with student and faculty letters of support, and was selected by a campus-wide committee of former award recipients. 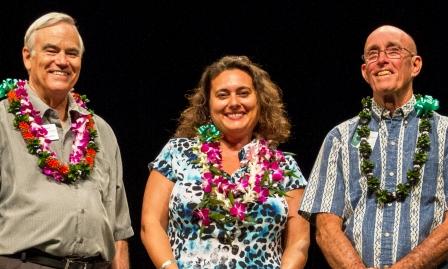 Guerriero believes that teaching must be innovative and combine the mind-body-artistic aspects that create vibrant and unique learning experiences. As an instructor in psychiatric mental health nursing, her work with students takes them into settings where they may experience inhibitions and misconceptions. An early adopter of simulation in her clinical courses, and later through the partnership between the School and actors from the Department of Theatre and Dance, Guerriero has created enhanced opportunities for students to function at a higher level of expertise. Through realistic simulations, nursing students are offered opportunities to practice therapeutic communication and care in highly charged emotional contexts. For example, Guerriero directs acting students to play the roles of patients and writes dialogues for situations of death and dying, anxiety, depression, stress and PTSD flashbacks. One nursing student said that they appreciated Guerriero’s assistance in analyzing “my therapeutic communication in a way where I felt un-judged and open to her constructive criticism.”

One student noted that Guerriero “radiated wonderful energy and … puts her heart into teaching, and does so in a way that is creative and mentally stimulating. Her grasp of patient care combined with an innate feel for a personal approach to teaching has affected me greatly.” A fellow UH Manoa Nursing faculty who supported Guerriero’s nomination said, “Maria has an excellent rapport with students, quickly gains their trust, and is able to motivate them to a high standard of achievement. She sustains momentum in the classroom using a variety of innovative techniques that keeps the students attentive and engaged.”

Guerriero received her master’s degree in nursing from Columbia University and bachelor’s degree from Rutgers University. Her teaching areas of focus are psychiatric-mental health, psychosocial nursing concepts, alternative nursing interventions, nursing health policy, nursing care of an aging population, and health promotion across the lifespan. She joined the School in 2002

Photos from the ceremony are available for viewing/downloading from the UH Manoa Flickr site at https://www.flickr.com/photos/uhmanoa/sets/72157652405791671. The video of the ceremony is available on the awards page at http://manoa.hawaii.edu/chancellor/awards/.