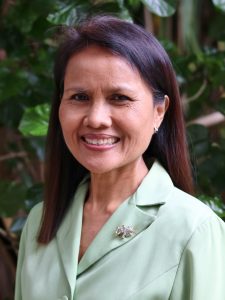 UH Manoa School of Nursing and Dental Hygiene (SONDH) is pleased to announce the appointment of Clementina D. Ceria-Ulep, PhD, MS, RN, as the Interim Dean, effective July 1, 2021. Ceria-Ulep will serve in this position until the permanent Dean’s position has been filled.

Ceria-Ulep joined SONDH in 1993 and has taught in both undergraduate and graduate programs. She has served in various leadership positions and has been the Associate Dean for Academic Affairs since 2016. Ceria-Ulep currently oversees the programmatic development and quality assurance of the department of nursing and department of dental hygiene.

She was instrumental in the implementation of the Hawaii Statewide Nursing Consortium in 2010, the development of new undergraduate pathways to the bachelor’s degree, and the launch of the Doctor of Nursing Practice (DNP) program in 2013. She has participated in three department of nursing accreditations.

In her role as Interim Dean, Ceria-Ulep will be a key member of the UH Manoa Provost’s executive leadership team and will be charged with providing academic and administrative leadership for the school. She will be the senior manager for SONDH and will be responsible for all administrative matters. Ceria-Ulep will lead and coordinate the SONDH academic, curricular, research and service programs.

As Interim Dean, she will ensure the advancement of the strategic plans of the University of Hawaii at Manoa and UH System. Additionally, she will be responsible for promoting the University’s commitment to diversity, equity and cultural values.