Before Bradley Kuo, DNP, FNP-BC, PMHNP-BC, CARN-AP, embarked on his nursing career, he worked in higher education administration. However, he soon realized that the higher up he moved in that field, the further he got from working directly with students. 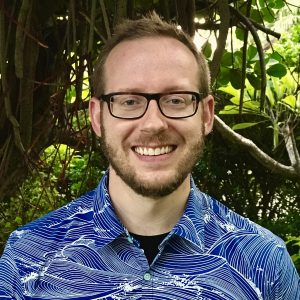 “I wanted the ability to help people and to do so in a way that would make a big difference in the community,” he said. “I had been toying with the idea of getting into healthcare, but I didn’t know how until I saw the information for the UHM MEPN program (University of Hawaii at Manoa Master’s Entry Program in Nursing) now known as the Graduate Entry Program in Nursing.”

During his time at UH Manoa, Kuo took advantage of the many online and hybrid course offerings within the program as well as the face-to-face variations. He credits the time with his cohort for helping him to see the exposure needed for transgender healthcare.

These experiences helped to shape his work in nursing and his own business, Wellness Partners Hawaii, delivering psychiatric care via telemedicine. After earning several degrees in nursing, including a bachelor’s and a master’s of science in nursing from UHM, as well as a post-graduate certificate from Johns Hopkins University for Psychiatric-Mental Health Nurse Practitioner (PMHNP), Kuo created a solution for a void that he knew needed it.

“Over the past several decades, money has been slowly and quietly stripped away from mental healthcare, making it one of the lowest reimbursable specialties,” Kuo said. “The rural nature of Hawaii has also made providing traditional, in-office care difficult.”

To help alleviate the issue, Kuo looked at the advantages Hawaii has to offer, one of which has to do with high broadband Internet speeds. Now, he and his team deliver care to patients throughout the State.

“State law allows patients to be in their homes when care is being delivered,” Kuo explained. “The feedback we have received from patients has been tremendous. They like being able to be private about their concerns. They do not have to sit in an office waiting room with others, and they are more apt to seek out mental healthcare services because of the increase in privacy.”

What began as a solo practice has evolved into one that comprises three nurse practitioners and four licensed clinical social workers, to deliver mental healthcare for patients throughout Hawaii.

“I never thought I would be in the position I am in now,” Kuo said. “I have worked in long-term care, hospice, forensics, pediatrics, and behavioral health, all experiences allowed me to take something special and use it in my daily work today. I have been able to take my nursing work and simply spread my wings.”

Aside from his practice, Kuo also works at The Queen’s Medical Center and is the immediate past president of the Hawaii Association of Professional Nurses (HAPN).

“This organization has truly opened doors for me,” he said. “I have been able to network with amazing colleagues to support the vision of APRNs [Advanced Practice Registered Nurses] and advanced degree nurses throughout Hawaii.”

Through these roles, as well as with an active relationship with the Hawaii State Center for Nursing, Kuo has contributed to the development of bills, testified in committees, and met with lawmakers to increase access to care for communities throughout Hawaii. He stays on top of developments in healthcare, technology, and in legislature.

When asked how he keeps up with the various legal changes, especially in terms of evolving technology, Kuo said, “I actually work to be part of the changes.”

“We are part of the most trusted profession in the country, and there is a reason for this,” he said. “There are so many aspects of nursing care that are not actually realized by many people outside of the profession. We are able to have our ear to the ground and work to ensure our communities are healthy.”