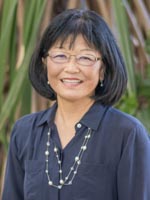 Dr. Merle R. Kataoka-Yahiro has been a clinical nurse in academia for more than 30 years specializing in family health nursing and has a doctorate degree in public health. Her research trajectory has been in the area of health disparities research working with vulnerable populations including women, children, older adults, and minority populations.

She has held leadership roles in three research education/training grants. Since 2013, Dr. Kataoka-Yahiro has served as the Co-Director and Associate Director for the Research Education core of the National Institute of Health (NIH) Mountain West Institutional Development Award (IDeA) Clinical and Translational Research Infrastructure Network (CTR-IN) grant. In 2013, she served as the Principal Investigator for the NIH Extramural Associates Research Development (EARDA) Awards, Office of Research Development. From 2010 to 2014, Dr. Kataoka-Yahiro served as the Section Leader and Co-Leader for the Research Centers in Minority Institutions (RCMI) Multidisciplinary and Translational Research Infrastructure Expansion Hawaii Grant (RMATRIX).

Dr. Kataoka-Yahiro is an investigator working on population data sets with Asian and Pacific Islander and Native Hawaiian populations in the prevention of chronic kidney diseases and related cardiovascular diseases. Since 2006, she serves the National Kidney Foundation of Hawaii (NKFH) as a nurse researcher and educational consultant and assists the NKFH to develop research protocols for the Kidney Early Detection Screening (KEDS) program. She has cultivated investigator partnerships between NKFH, UH Manoa Nursing, the John A. Burns School of Medicine, and the University of California, Irvine.

She has contributed to all levels of the department’s instructional program: BS, MS, DNP and PhD. She has served as the Graduate Chair and has overseen the curriculum audit of the Master’s Graduate Core and Advanced Practice Nurse (APN) curriculum, Master’s Entry in Nursing Program, and Undergraduate Nursing Programs in preparation for the 2010 CCNE accreditation. She was responsible for graduate nursing courses in family nursing, curriculum evaluation, teaching practicum for nursing education, and nursing research. Her educational publications are in critical thinking, decision-making, service-learning, and cultural diversity.