On Wednesday, October 15, 2014, the UH Manoa (UHM) senior nursing students participated in the State of Hawaii, Department of Transportation’s Triennial Aircraft Disaster Exercise (TADE) at the Honolulu International Airport. The multi-agency exercise simulated a full-scale plane crash that tests and evaluates the operational capacity of emergency response in a stress environment. The exercise provided UHM Nursing students the opportunity to work as first responders alongside other nursing students from Hawaii Pacific University and Chaminade University. 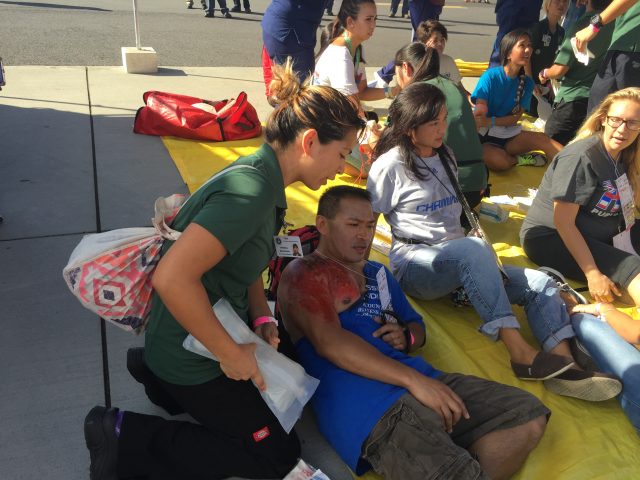 The main focus for the nursing students during the exercise was to practice use of the Incident Command System – a systematic tool used for the command control and coordination of emergency response – and perform disaster triage and treatment skills. Students standing-in as victims wore moulage (fake blood and injuries) to mimic the traumatic wounds often seen during actual disasters. The event was a great opportunity for nursing students from three nursing schools to work cohesively in an intense and stressful environment, an experience most of them had never encountered.