UH Manoa Nursing is pleased to announce that three Nursing students were selected as prestigious UH Regent and Presidential Scholars. Jarek Garcia from Hanalani High School and Jenise Lam from Kaiser High School were named 2015 Regent Scholars. Both were accepted into the Nursing High School Direct Entry Program and will start nursing curriculum in their freshman year. Lorie Ann Mangay-Ayam, a 3rd semester Nursing student, was named a 2015 Presidential Scholar.

Regent scholars are incoming high school students who receive a 4-year scholarship and travel grant. This year, 20 regent scholarships were awarded to outstanding freshmen who receive an SAT combined score of at least 1950 on all three sections of the test or ACT combined score of at least 29. They maintained at least a 3.5 high school GPA and demonstrated remarkable extracurricular involvement.

Presidential scholars are UH students who will be entering their junior year and will receive a 2-year scholarship and travel grant to be used in their final years of undergraduate study. This year, 10 college juniors were named 2015 presidential scholars and have a minimum cumulative GPA of 3.7, a record of sustained progress in academic courses and evidence of superior academic achievement or creative endeavor. 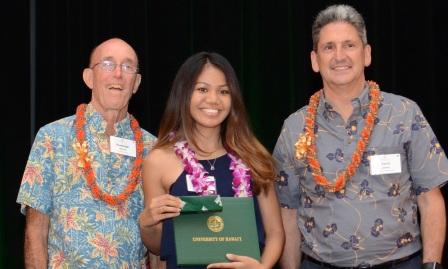